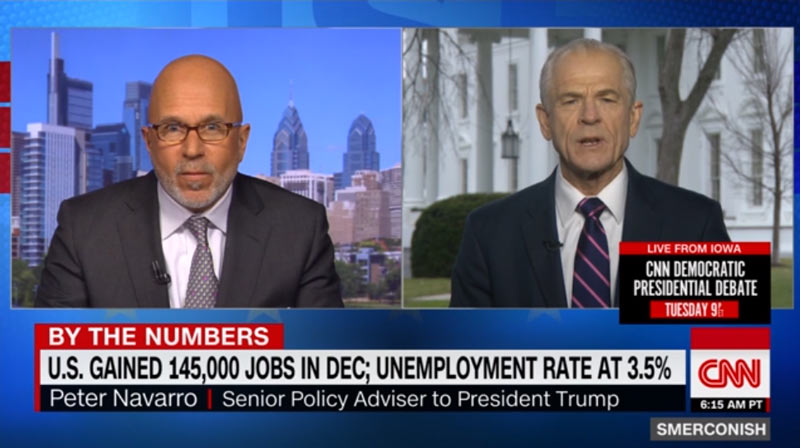 SMERCONISH: With me now is senior policy adviser to President Trump, Peter Navarro. Peter, congrats on the job numbers, but I do want to ask this question. You would — you would think that there would be more competition for employees that would be driving up wages. That doesn’t seem to be taking place. Why not?

So blue-collar workers are doing great. Looking ahead to 2020, Michael, we’re hitting on all cylinders. If you look at the GDP growth equation, consumption investment, government spending and net exports, all of them are going to be strong in 2020. We’re going to get to closer to 3 percent than 2 percent and I predict that the stock market, the Dow will be over 32,000 and I have some street cred on that because the day after the election, I predicted Dow 25,000.

So all good here in Trump land. The difference, Michael, is the culture of the Trump administration is that every single day, we think about creating jobs for America, particularly for people who work with their hands and we do it at the macro level with things like tax cuts, deregulation and fair trade. We do it at the micro level by helping shipyards and combat vehicle production facilities and everywhere across this great land.

NAVARRO: Sure. And the wage numbers.

SMERCONISH: But I want to — and yes —

SMERCONISH: How about this? How about what the folks at The Peterson Foundation say? You know that they remain alarmed about the nature of the federal debt and deficit. NAVARRO: Yes.

SMERCONISH: Those numbers continue to escalate. What about that? I was born, Peter, of an age when the Republican Party —

SMERCONISH: — was the party of fiscal prudence.

NAVARRO: Sure. Well, elections do have consequences, Michael, and we had to negotiate with a Democratic House on this last budget go-around and we spent more than we otherwise would have, but I’ll tell you this.

The National Defense Authorization Act and the appropriations bill that was passed two weeks ago is really the sleeper in terms of keeping the economy really robust in 2020 because it puts a beautiful fiscal policy floor underneath this economy and I think until the bond market starts worrying about the deficit, everything will be just fine.

SMERCONISH: But it sounds like you’re laying it off on the Ds, even though it’s that tax cut, right? That ended up costing more than it was bringing in.

NAVARRO: No, I think — here’s the thing. Again, the culture of the Trump administration, if we want to balance the budget, the best way to do that is to grow at 3 percent or 3.5 percent instead of two percent. That generates trillions of dollars of extra tax revenue. So that’s what our focus is and, you know, we had, in 2019, if the Federal Reserve hadn’t raised rates too far too fast and lowered them too slowly, we probably would have had another point of growth.

SMERCONISH: Before you leave me, make some news. What’s going to happen this week vis-a-vis China?

NAVARRO: Oh, that’s great. We’re going to sign, in the building behind me, a historic phase one trade deal with China and there is a window of opportunity, Michael, to pass USMCA in the Senate before Nancy Pelosi does her — does her thing and you would have two of the biggest trade deals in history signed within days of one another, great news for farmers, ranchers and manufacturers and workers. And so it’s going to be a wild, great week for trade in Washington here.

SMERCONISH: It’s remarkable to me, as a — as a political animal, just how much of the political — I’ll use the word chaos doesn’t seem to impact the numbers, the economy, what transpires on Wall Street.

NAVARRO: Well, the smart money sees through the noise. I mean, listen to the signal, ignore noise. The signal of the Trump administration is a focus like a laser beam on creating a strong economy, a strong manufacturing base, defending American workers against unfair trade and President Trump has performed beautifully on this. His jobs plan speech, seven promises, June of 2016, he fulfilled every single one of those and we’re seeing that in the job numbers. So that’s our focus. That’s what I do every day.

[09:20:00] I’m just trying to help this president create jobs, particularly for the working-class people of America. And the Philly Shipyard right near you, that’s like one of my — one of my projects for 2020.

SMERCONISH: Yes. I know that.

NAVARRO: We’ve been able to really get that thing moving and I’d love to come back on the show and talk about how we did that, but that’s the kind of thing President Trump is doing and all this other stuff going on, you know, listen to the signal and ignore the noise.

SMERCONISH: Peter, thank you for being here. Appreciate it.

NAVARRO: Hey, one last thing, just if — maybe a little news. Buttigieg piety without wisdom is not doing this country any good.

SMERCONISH: I’m going to take that as your vote on the survey question of the day at Smerconish.com.

White House trade adviser Peter Navarro says that if the U.S. allows China to cheat and steal American intellectual property, “we won’t have a future.” And America has a right, Navarro tells Judy Woodruff, to defend American economic and national security by imposing tariffs on China. They discuss President Trump’s outlook and the effects on American industries like agriculture.

China is stealing our technology: Peter Navarro on Lou Dobbs