“One of the best books I’ve ever read. I’ve been a fan of Peter Navarro for a very long time. He’s been my hero, he’s also been right there on voter integrity, on the scam and the fraud that went on. 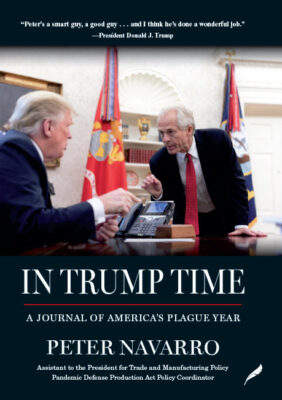 A must-read riveting account of America’s plague year from one of the top Trump advisors who first sounded the China pandemic alarm, exposed Dr. Fauci’s destructive actions and laid bare the facts about the 2020 presidential election.

In Trump Time, A Journal of America’s Plague Year  tells the story of a president who worked night and day for the American People, who built the strongest economy in modern history and who would deliver a life-saving suite of vaccines to the American people literally at warp speed.

Peter Navarro is one of only three White House officials by President’s side from the 2016 campaign to the end of the president’s first term in office. Always moving In Trump Time as was his signature, Dr Navarro played a pivotal role in the rapid development of both vaccines and therapeutics like Remdesir.

“[Peter is] one of the most important people that served in the Trump administration and was loyal to the President to the very end, which is somewhat of a rarity…he has new book coming out! In Trump Time…Everyone check it out.”

As Defense Production Act Policy Coordinator, Navarro was at the center of ramping up domestic production of critically needed Personal Protective Equipment and while helping President Trump ensure that every American who needed a ventilator had a ventilator.

A compelling page turner of a book that tells the story of America 2020 from inside the White House.

“It sounds like a very interesting book! Peter Navarro, one of the early warners about COVID-19, that’s absolutely true.”

“We want answers and I hope the world never stops asking. I think we all know where it came from but we want to hear top officials admit as much and we want to make sure it never happens again. That’s why I think In Trump Time is such a critical book…you’re well on your way to a best seller.”

“The author of the original book exposing China… which was one of the best books I’ve ever read, I’ve been a fan of Peter Navarro for a very long time. He’s been my hero, he’s also been right there on voter integrity, on the scam and the fraud that went on. Peter Navarro one of my favorite people in the whole world and I’m such a fan of his so I’m not even gonna be shy about it. He’s a brilliant guy and he’s got a new book out now, [In Trump Time] which I can’t wait to read!”

“Thank you my friend. Thank you and thank you for the book. It is a MUST for everyone out there…I’m looking forward to the full read!” And to help the American people understand, something you’ve always been willing to do in your career on and off media: call it like it is, work with it and understand how the business of the nation works. So, I’ll thank you for that as I know a lot of people appreciate that.”

“Author of a brand-new book, In Trump Time: A Journal of America’s Plague Year, you have to get this book!” “This book does such a great job of setting the record straight, really describing what happened in the pandemic, what the media got wrong [and] what Fauci got wrong.”

“You [Peter] have what is going to be a tremendous book coming out about your time in the Trump administration!”

—Cheryl Chumley podcast of Washington Times 10-12-21
Bold and Blunt: The Incompetence of Democrats Is ‘Unprecedented’ (washingtontimes.com)

BOOK: If It’s Raining in Brazil, Buy Starbucks: The Investor’s Guide to Profiting from Market-moving Events

by Peter Navarro  (Author) 4.3 out of 5 stars 47 ratings The hardcover edition of If It’s Raining in Brazil, Buy Starbucks first introduced investors to “macrotrading.” Instead of just theorizing, the breakthrough investing strategy actually quantifies the impact of global economic forces on specific sectors of the stock market. This paperback edition delivers macrotrading to a new More…

John visits with former assistant to President Trump Peter Navarro about his new book and gives listeners an inside look at the Trump White House. You can get more information on how to get the book at https://bit.ly/intrumptimeknss.

Fox News: Peter Navarro on how US is fighting the spread of coronavirus