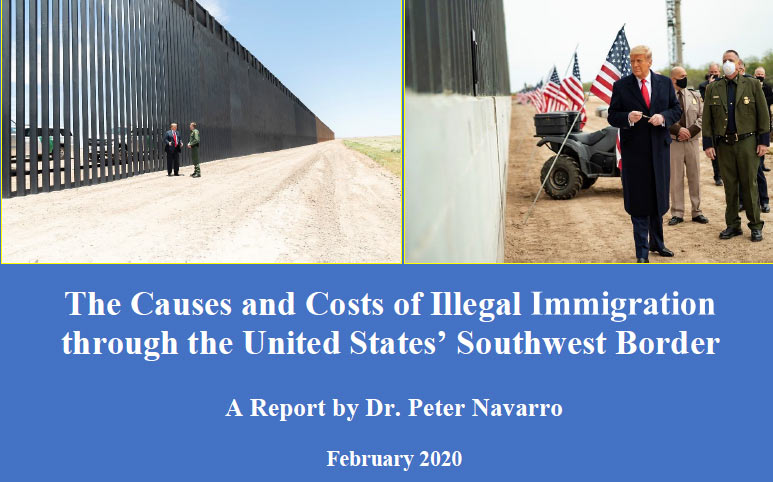 Illegal migration has vexed the United States for decades. Donald Trump prevailed in 2016 largely on a promise to finally confront this massive threat to America’s sovereignty and prosperity. His first term accomplishments proved the efficacy of smart, tough policies regarding immigration and border defense. But with a Biden presidency, powerful interests align to roll back the Trump progress and regress to an era of porous borders and nearly open-ended migration into America. Such a retreat will reward big business seeking cheap labor and the Democratic party luring new constituents. But a massive new inflow of migrants, both legal and illegal, will bring grave harm to working class Americans, lowering wages, inflicting gigantic costs upon taxpayers, and jeopardizing US national security.

The Causes and Costs of Illegal Immigration
through the United States’ Southwest Border
A Report by Dr. Peter Navarro
February 2020

The three volumes of the Navarro Report provide a demonstration that President Trump had a good faith belief that the November 3, 2020 Presidential election results, were, indeed, the poisonous fruit of widespread fraud and election irregularities. Evidence used in the preparation of the Navarro Report includes more than 50 lawsuits and judicial rulings, thousands More…

CNN: Trump’s top trade adviser says Mexico tariffs ‘may not have to go into effect’